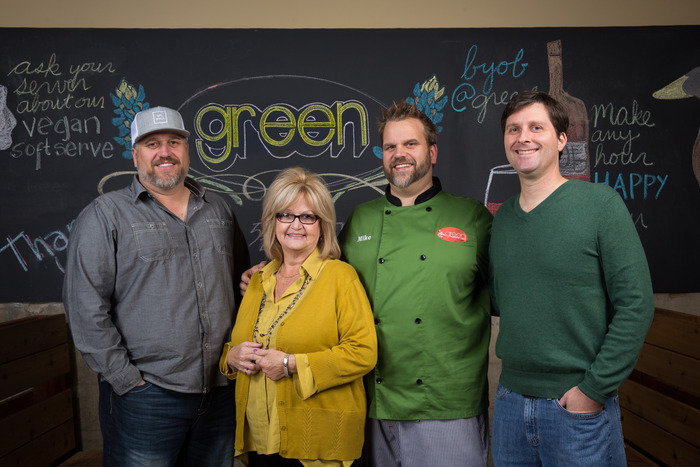 The team at Green San Antonio

Editors Note: I have had the pleasure of knowing Ellen Evans and her family for over 10 years. We met when we both served on the board of the Public Relations Society of America in San Antonio. She is a gifted communicator and has creatively taken on a Kickstarter campaign to fund a new vegetarian drive-thru concept restaurant in San Antonio. Here are some great tips based on her real-life experience. Earth Burger reached its fundraising goal of $40K with 302 backers.

5 Tips for a Kickstarter Campaign

You know the drill: small businesses have few resources. So what should you do when your client says they are doing Kickstarter to raise money to crowdfund a new concept, and that you’re in charge of executing the campaign? Here are five things to help you jump start your Kickstarter planning when you’re the lone communications practitioner.

The thing about Kickstarter is that you don’t know when your project will be approved. Kickstarter could take anywhere from 24 hours to three weeks to bestow its blessing. If possible, give yourself a window of padding after the approval process so you can identify some key influencers in your industry to review your campaign link and provide feedback. This will help create ambassadors who are influential with their peers once your project is live.

During the planning process, creative pre-Kickstarter meetings and events with the local media and appropriate bloggers in your market. One month before launching the Earth Burger Kickstarter project (a vegetarian drive-thru), we invited key Mom bloggers and media in for a full menu tasting. We also provided PR kits and giveaways for their readers. Once Earth Burger launched and stories were written and posted, we acquired 17 backers from their efforts – which is seven percent of our Backers to date.

Plan your Kickstarter challenge carefully. Is your local NPR station having a fundraising campaign? Are there any major holidays during your campaign dates? Due to time constraints Earth Burger was stuck with the month of April for Kickstarter. April in San Antonio, Texas, is busier than December. Not only did we have the NPR Fund Drive, but we were also up against the City’s 10-Day festival called Fiesta, which has at least a $284 million impact on our economy; and just our luck this year Fiesta was graced with an extra 7 days to avoid the opening and closing falling on Easter and Passover.

One is a lonely number.

Managing Kickstarter, pitching stories to the press, reaching out via Twitter to potential influencers, creating in-store marketing material, social media calendars, coordinating events – well it’s a lot for one person. You’ll be in a Kickstarter vacuum, and it will suck the life out of you during your 30 or 60-day campaign. Before you start your campaign, reach out to another business professional or two to see if they will help you for a small fee, or for the Kickstarter experience. I don’t recommend this because you can’t do it all – of course you can; however having another person’s insight, or having them help with researching Twitter, scheduling posts and Tweets, and uncovering potential influencer’s will be big help during this Kickstarter sprint. Believe me, a Kickstarter campaign is not a marathon – it’s a sprint from beginning to end.

There isn’t a better way to get someone excited about your product than for him or her to experience it for themselves. Whether it be a food tasting, a social gathering to see your new building, or a coffee to meet the inventor – people want to see and experience what is new and upcoming. At these events you can turn new fans into Kickstarter Backers.

Articles on-line have shown that Facebook will be your number one Backer referral. Our experience has shown the same thing. As I write this we are in Day 23 of Earth Burger’s Kickstarter Campaign. Thirteen percent of our Backers have pledged through Facebook. On a daily basis I’ve noticed a trend: donations don’t come in unless I’m constantly posting to Facebook, Twitter, Google+, Instagram, Pinterest and writing Kickstarter updates. With Facebook’s low algorithm and Twitter’s continual moving feed, our fans aren’t always seeing our posts. Constantly creating content is what I’ve called “Stirring the Social Media Waters” to keep the donations swirling in – which is needed to hit the right people at the right time.

Ellen Roberts-Evans is the Director of Community Love for Green Vegetarian Cuisine located in San Antonio and Houston, TX. She has 20+ years of public relations experience, and is currently in her last week of a Kickstarter campaign for Green’s new spin-off, Earth Burger – Texas’ first vegetarian drive-thru restaurant.