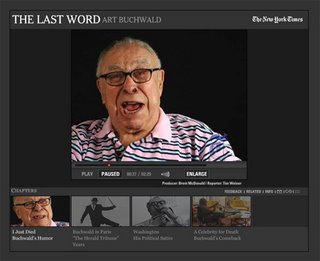 On the death of humor columnist Art Buchwald, The New York Times ushers in the video self-obituary – a mix between YouTube and journalism.

Called, “The Last Word” the feature opens with Buchwald declaring, “Hi, I’m Art Buchwald, and I just died.” It ends with the well-known humorist, who once wrote for The New York Herald Tribune in Paris and later a syndicated columnist in The Washington Post.

What do you think about this mixing of the new media feel with old media style? I for one think the mainstream media will adapt to the needs of its audience and these kinds of incremental changes prove this theory – at least in my own mind.

What was Art Buchwald’s last word?

Because of what I’ve gone through for the last six months, I had time to plan my funeral my memorial….I would have a Blue Angel Navy plane fly over the site, I would be cremated and my ashes be dropped over every cocktail party on Martha’s Vineyard, all of the sailboats out here would be at half mast…and everyone would say what a wonderful guy I was.