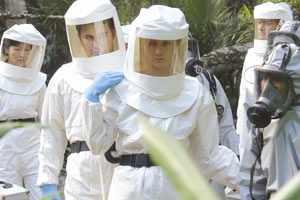 What if you were a health official, in charge of response in your state for any outbreaks of disease?

What if a large television network made a movie about the “worst case scenario” that you were concerned would unnecessarily worry people.

That is just what happened last night when ABC aired Fatal Contact: Bird Flu in America,
a movie about what could happen if the Avian Flu ever mutates in a form that can be passed from human to human.

State officials worked in concert with the U.S Department of Health and Human Services to address concerns that arose from the movie.

This morning, in a call I made to Debbie Crane, public affairs officer for South Carolina, she said that the HSS pre-screened the movie and sent out talking points and frequently-asked-question templates for the states to modify to their own needs on Monday, making a response easier (See the HHS Website concerning pandemic flu).

North Carolina’s Department of Health and Human Services opened up a helpline to answer questions, provided Devlin for comment and also announced a pandemic flu exercise that will be conducted later this year.

Other states also responded, making the airing of the movie an opportunity to get out important information, including that H1N1 strain of flu has not yet mutated into a human form and store-bought chicken, cooked to 160-degrees should be safe to eat. There are guidelines for hunters and handling wild game on the HHS Website.

In other words, a seeming crisis is often the way to break through the clutter and deliver your message, but only if you are prepared.

(Update) Other states that responded to this issue include:

If you have a link you would like to add, please post it in comments and I will move it here with a credit to you.
Tags: Crisis Communication|Case Study|Avian Flu|Bird Flu|PR|Public Relations