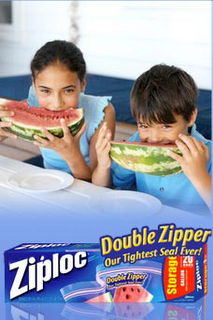 Today is a good day to be Ziploc, a Johnson and Johnson company.

As I am sure you have heard that “Kip” Hawley, administrator of the Transportation Security Administration for the U.S. government, said at a news conference today, that starting Tuesday, “Medicines, shampoo, hand lotion, baby foods and lip gloss will be allowed through airport security checkpoints if they are carried in small containers (three ounces or less) and sealed in clear, quart-sized zip-top bags.”

I am sure the terminology “zip-top” wasn’t accidental, as the government was probably trying to avoid commercializing the message, but Ziploc the brand has come to be closely associated with the handy plastic bags that people use to store food and other stuff. So, they are the first brand that comes to mind. Much like Kleenex has come to mean tissue and Hoover to mean vacuum cleaner (in the U.S.).

I myself will have to go out and buy some more of these ubiquitous bags, as right now I only have snack, sandwich and gallon sized bags, but not the handy quart-sized bags called for by the TSA.

Still, Ziploc will need to take care, as all companies do, to walk the fine line between popularity and the genericization of their trademark. According to the Wikipedians, “A trademark typically becomes ‘genericized’ when the products or services with which it is associated have acquired substantial market dominance or mind share.”

The risk is that it would become so generic that it is indefensible for a company to own the name. Something similar is playing out right now at Apple with the term “podcast” and any other uses of the word pod. Apparently, they are trying to defend the term as a derivative of their trademark, iPod, by sending “cease and desist” letter to companies using “pod” in their name or Internet domains.

In the full text of Apple’s cease-and-desist letter to the company TightPod, they ask the company to abandon the use of the name within 10 days. This is not a podcast, but similar letters were sent to those with podcasts that contain the word “pod” in them.

From a public relations standpoint this is a disaster, but it fits right in with the legal way of thinking about this issue. Shel and Neville also covered this issue in the For Immediate Release #164 podcast back in August.

One could reasonably argue the term has already become generic and that Apple doesn’t stand a chance on this one. I imagine the legal eagles see this as a way to defending a possible dilution of the iPod trademark down the line. But is it worth the dent in their reputation?

So what do you think? And more importantly, do you have a couple of quart-sized Ziploc bags that I could borrow?