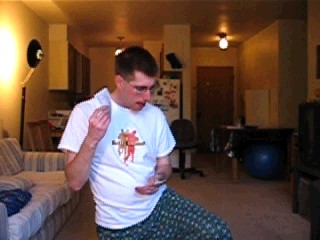 It’s the worst dancing I have ever seen, really.

But it is hilarious.

He posts a new dance a few times a week.

And he takes requests.

He is an anonymous American software developer.

And he is very popular (Technorati Rank: 4,439), so popular that last week, when I intended to make him the Fun Friday feature, his server crashed. But the site is back up again, so go visit. I am linking to the whole site so you could get the full effect and pick the song you want to watch.

If you want some guidance, today’s selection was pretty good, but yesterday with his Michael Jackson impersonation of “Smooth Criminal,” well, I had to click on. 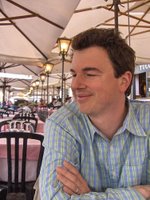 However, he has only 370 subscribers on his Feedburner feed, so not quite as good as Scott over at the Media Orchard.

So Scott, you are off the hook, you don’t have to dance for your fans for your 41st birthday yesterday, though I assume it would really improve your traffic.

Happy Birthday Scott! Even if I am a day late, link love lessens all pains.