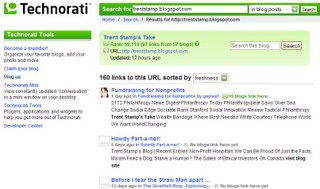 Trent Stamp, who is the president of Charity Navigator, which rates American charities, runs an excellent blog called. It’s a good read for those involved with the non-profit world.

However, I have to take issue with a piece that he wrote last week that blasted the Red Cross for hiring a communication professional to monitor blogs for the organization, calling it an “absurd use of donor money.”

Stamp’s concern with the Red Cross, according to his follow-up comments, was more with the news last week that a former accounting employee at the Orange County chapter of the Red Cross embezzled around $100,000 over her tenure at the organization.

Trent was using the new position at the national NATIONAL organization to make his point about something that happened at a LOCAL chapter, the two are unrelated in finances, leadership and scope.

Here is my take. I think that the Red Cross is using its money well to monitor and participate in a global conversation. Last week Ben Silverman, who works for Indie Research penned a great article about Policing Your Image on the web.

He found, and had removed or changed, six different items that were incorrect or fraudulent, including inaccurate pricing information, an employee MySpace page with his company name and references to drinking, a misquote in Wikipedia, a fraudulent resume and so on…

My question is this, “Why is it unethical for a charitable organization, especially one as large and complex as the American Red Cross to keep an eye on all of this information?” I for one think it is essential that they do. A quick check of Technorati tells me that today the site has 10,810 links and a rank of 8. So, lots of stuff is being said out there, some of it that might be blatantly false and some of it helpful to the organization.

And Trent wonders how this helps with the delivery of service? I think that it will revolutionize service for charities like the Red Cross, whose purpose is to help people prepare and respond in a disaster. The Internet, and the legions of people that participate as content creators, is particularly suited to help in this mission.

Trent writes a blog to raise awareness about his organization, I am sure he checks Technorati (or at least Google) to monitor what is being said about his blog and organization. Is this also a waste of money?

I don’t think so.

(Disclaimer: I serve as a volunteer for the San Antonio chapter of the Red Cross; however, they know nothing about this post…yet).