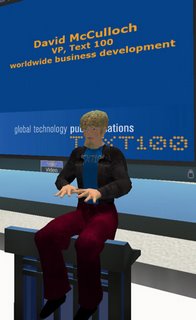 We had a meetup of real-world communicators at the Text 100 office in Second Life last week. I have to say that I learned a lot more about what makes this place tick. At some point during the 1.5 hour meetup, we had 27 people stop by. An increase from 17 at our last meeting.

Some of the bloggers that I knew were there included Andrea Weckerle; David Parmet; moo Money, a machinima movie maker; and Jason Pettus, a reporter from “In the Grid.”

I think there were a few more, but I have no idea who they were. This double-identity thing is something that I am still getting used too, but it is a huge cultural virtue in the SL community.

The main focus in this time around was to learn who the “residents” of Second Life are, their demographics and their ideas, and what makes them tick.

David McCullough, VP of global business development for Text 100 was our host and MC.

Deeeep Witte, a freelance reporter for Second Life Business Magazine, among others, offered a few details that he recently learned from a Dutch study. I don’t have the link to the study, but I suspect that Deeeep will write about it in an upcoming issue.

Here is what he said the study found:

In May 2005, Robin Linden, who works for the parent company, gave the following demographic breakdown of Second Life residents:

It does seem that founding residents, or the innovators of Second Life (See Everett Rogers Diffusion of Innovations) are quite Libertarian in their thinking. They don’t like marketing or public relations stunts, per se. In fact, some marketers that have taken to throwing leaflets at people risk of being labeled a “griefer,” or someone that is a troublemaker. These people can be banned from Second Life. But more importantly, people can choose to ignore your big building in Second Life.

For example, take the American Apparel Store, I have been there a few times and have never seen anyone there. Getting to messages to the people can be tough.

That is where the media of Second Life come in. There are several media outlets that cover Second life. And for those that are even remotely interested, I have started a Second Life Media del.icio.us tag (SLMedia), in which I will link to the publications that I run across. You can start by reading Deeeep’s latest article about PR in Second Life (pdf), which starts at page 100 of the PDF.

The interesting thing about mass communication in Second Life is that it doesn’t really exist. The best way to communicate, it seems, is through the Second Life-themed blogs.

Funny how new things are really just an evolution of the old.

I have posted a full transcript of the Second Thursday in Second Life communicator’s meetup. Thanks to Aaron Uhrmacher of Text 100 for providing it, since I logged out before I captured it (doh), and for setting up the meeting and its various speakers. Also, take a look at Andrea’s Flickr photo stream of the event

Ever your Second Life “informed skeptic,” or as Andrea says, your “informed questioner.” What do you want to know about Public Relations in Second Life, if anything?