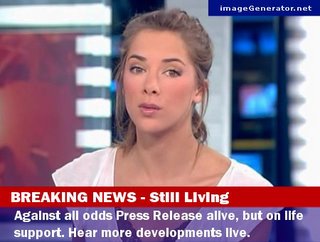 Talking about a tool, such as the press release, as if it is the crux of all PR woes, is misguided. In the end it is just that, a tool, and you either use it or don’t based on the situation. The core issues are the professionalism of those who practice PR, for which I think training and accreditation are good steps; and the other is the issue of distribution, as Amy Gahran and Todd Van Hoosear of Topaz Partners have so ably pointed out with the FCC issue, and Jeremy Pepper points out nicely in recent posts about Business Wire being acquired by Berkshire Hathaway and the overall wire service industry.

We are moving to a new model of distribution. However, I think it will be awhile before a critical mass of non-tech media move to adopt RSS as a distribution channel. Of course, the more companies who offer it, the faster the adoption rate. After all, it was less than ten years ago that we pondered if we should send our information to reporters via fax or e-mail?

In my role as a trade press editor for Modern Homes, I use press releases every day. In fact, yesterday, I was talking with a PR guy who pitched me on some ideas and I asked “Do you have a press release about that issue?”

We also have two sections, a personnel moves section and a new products section, that I can’t accomplish without press releases. No pitches please on these sections, I just don’t have the time. It is a bit of a pain, but our readership survey’s show that these two sections are some of the most popular. I do prefer pitches when it comes to features, because I am unlikely to cover a company unless it is illustrative of an industry trend.

PR 101: How do they Want the Information?

Most reporters and editor do want your information. Have you asked your contacts how they would like to receive it?

If you call me I will tell you, I want on-target releases, I want pictures to accompany them and I hate faxes! And yes, I still get them occasionally. I like soft copy because if I decide to use it I can cut and paste and start my usually massive editing of words like award-winning, industry standard, leading, and so on. Does the marketing department write most press releases these days?

I realize bad PR happens, I get wildly off-base stuff every day, but I still want the relevant press releases. Quite frankly, I have a bigger problem with the spam selling me cheap prescription drugs and enlargements for body parts I don’t have.

I love a good Online Press Room. There have been times that we don’t get enough on-target press releases and we reach out to the pressrooms of companies in our industry. Most have one, but none have RSS feed. If they did, I would subscribe and teach my other editors to do the same. Once I got there, I would want the press release and all relevant pictures in hi-res format (300 dpi, 4×5 or bigger).

The Press Release Has Left the House

Maybe, but honestly, we need a common format in which to put information that can be easily searched and organized. The blog isn’t yet this source, since as we all know the archiving issue isn’t 100 percent intuitive. So, it may be that we get everyone to agree on a new standard, but until that time the press release will be with us.

(Update: Mike at Mike's Points also lists a few situations where a press release might be warranted.)